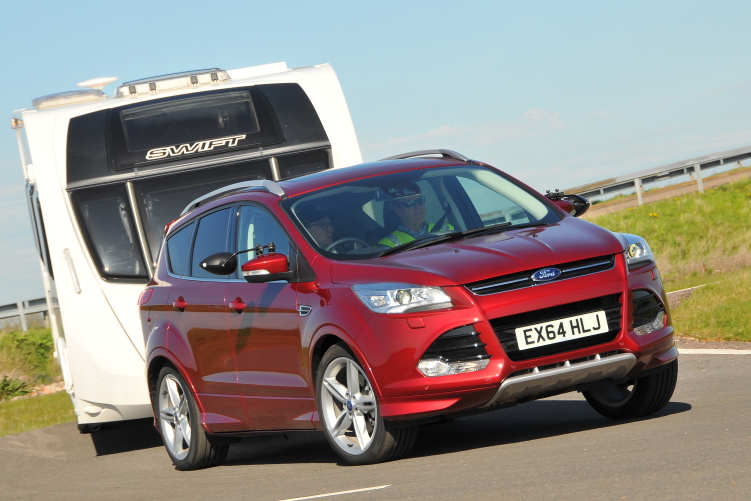 We tested the Ford Kuga last year, but Ford has already updated the car.

The new 178bhp engine gives it even more punch. Accelerating from 30-60mph takes 12.7 seconds. That’s pretty brisk, so you won’t be stuck behind dawdling traffic for long.

The Kuga is a stable tow car as well as a reasonably quick one. At the legal limit it feels secure, although some drivers found the caravan began to move around a little in crosswinds. That said, the Al-Ko ATC sensors on the caravan detected no instability when slowing down from high speeds.

At first, the Kuga took the lane-change test in its stride. However, as we repeated the test at higher speeds the caravan began to slide around more, and on the third and final run the Kuga really struggled.

We could live with a so-so performance in the lane-change test, but the hill-start is why the Ford Kuga picks up a worse score this year than in 2014. The handbrake wouldn’t reliably hold car and caravan still on a 1-in-6 slope, even when pulled on very hard.

Without a caravan to pull, the Kuga is a fun car to drive with precise steering, tidy handling and a firm but not uncomfortable ride.

Inside, passenger space is reasonable, but the boot is significantly smaller than a Honda CR-V‘s. Our practicality testers couldn’t find a way of squeezing in all our typical holiday luggage. The reversing camera was a definite plus, but the electric socket was awkward to access.

Top-spec Titanium X Sport cars come with a long list of toys, but so they should with a price tag of over £32k.