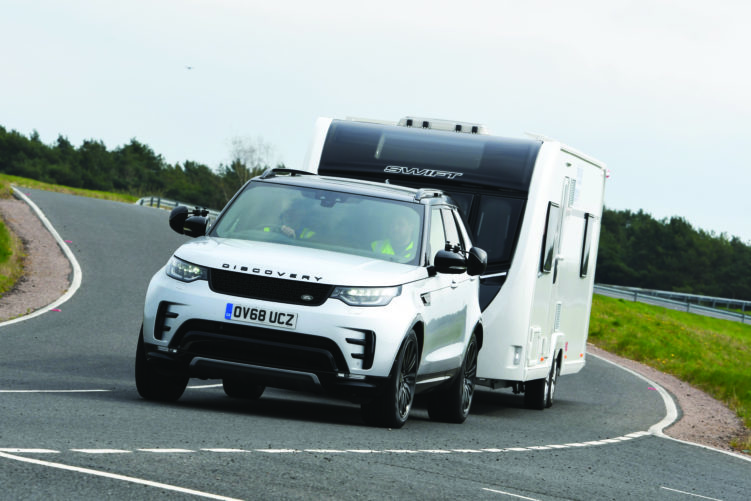 Still our favourite heavyweight, the Discovery has won this award for 12 years out of the 13 since the Tow Car Awards were established.

This year’s victory was far from a foregone conclusion, though. In 2019, the Discovery has faced some of its toughest challengers ever.

In extreme manoeuvres, such as our lane-change test, the likes of the BMW X5 and Volkswagen Touareg match or beat the big Land Rover.

But to tow long distances, in all weathers, and end your journey feeling relaxed, this is still the pick of the bunch.

It might roll a little if you change direction in a hurry, but in normal towing, that softer set-up means the Discovery glides over broken Tarmac.

Comfort doesn’t come at the expense of control, as it feels tied down over dips and crests. At motorway speeds, the Discovery is serene, the caravan following obediently with little more than the odd twitch when the wind picks up.

Overtaking is achieved both confidently and quickly, as the rapid 9.2-second 30-60mph time shows. The engine is also refined as well as strong, pulling hard without disturbing the peace in the cabin.

Passengers will end each journey as relaxed as the driver. There’s lots of space in all three rows, and the Discovery is noticeably better at seating seven than its rivals.

Cabin flexibility is second to none, with seats that slide, recline and fold down.

With the rearmost seats stowed, the boot is absolutely huge. Our practicality test team easily found space for all their holiday clobber.

They were also pleased to note the full-size spare wheel as standard (it can be swapped for a slim spare at no cost).

The Land Rover is premium-priced, even next to upmarket opposition. But strong resale values help to keep whole-life costs sensible.

If you have the means, you can’t buy better.